What is a schwa sound?

Posted on 16th March 2021 in Approaches to Teaching Reading, Learning to Read 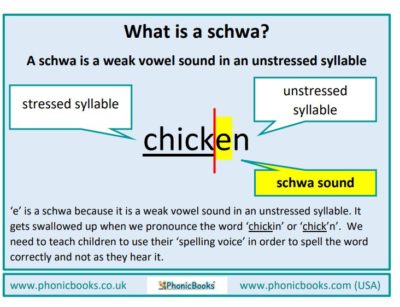 What is a schwa sound?

And – did you know it is the most common sound in the English language?

A schwa sound is a weak vowel sound in an unstressed syllable.  Here is an explanation:

Most multi-syllabic words in English are pronounced with a stress on one syllable. Take the word ‘chicken’ the stress in on the first syllable ‘chick’. This is the strong syllable and the second syllable ‘en’ is a weak syllable (because it isn’t stressed). Listen carefully to how you pronounce the word ‘chicken’ and you will notice that you don’t actually say the ‘en’ in full, but gobble it up and say ‘chick’un’ or ‘chick’in’. That gobbled up vowel sound, spelled by the letter , is a schwa sound. Because most multi-syllabic words have weak syllables, the vowels sound in those weak syllables are schwas. That it why it is the most common sound in English.

Why does this matter?

As teachers we are always asking our students to listen to the sound in words when they spell. BUT – if they listen to the sounds in multi-syllabic words, they will hear and spell the schwa sound. That is why children spell the word ‘chicken’ as ‘chikn’, chikin’ or ‘chikun’. They are doing what we have asked them to do! They ARE listening to the sounds in the word! We need to encourage them to use their ‘spelling voice’. So, for example, when spelling chicken they will need to say the syllable ‘/e/ /n/’ in ‘chicken’ clearly, as they spell the word.

That is why schwas are important and we need to teach them!

To see our other info-graphics about phonics visit

Tags: #spellingmatters, explain schwa, how to teach schwas, schwas, teach schwa, what is a schwa?.
Click here to cancel reply.