Invention of the Alphabet – the internet of the second millennium BCE

Posted on 6th November 2020 in Learning to Read

I have been listening to the History of English Podcast (recommended!) and I have had a serious light bulb moment!

Before the genius (but simple) idea that a limited number of symbols can represent the speech sounds of a language was invented, the written scripts of the ancient world such as hieroglyphics (used in Egypt) and cuneiform (developed by the Sumerians, present day Iraq) were getting increasingly complex.  They started out as pictograms (pictures representing words). With time, the pictograms became more abstract.  They also began to represent syllables and initial sounds too.  An Egyptian scribe would have to learn thousand of symbols and spent several years to become literate.  This confined literacy to an educated few.

So how did this amazing invention happen?

The most recent theory is that during the second millennium BCE, Canaanite slaves who were unskilled in reading hieroglyphics, devised a much simpler way to write down speech sounds of their own language.  How did they go about inventing a simple code that they could use?   They took Hieroglyphic symbols and used them as symbols to represent sounds of speech.  For example, the hieroglyph for a house (see below) looked like a birds-eye view of a house.  They matched it to the word ‘house’ in the Canaanite language – ‘bayt’ (as it still is in Hebrew today).  As the word ‘bayt’ begins with the sound /b/, this symbol now represented the sound /b/. The letter ‘bet’, later to become B, was born!  This became the Phoenician alphabet.  See in the table below how the Egyptian pictogram on the left became a letter that represented the sound /b/ and evolved through Greek and Roman alphabet to be the letter B in our alphabet today.

This simple and genius principle of symbols representing sounds of speech spread like wildfire.  The Phoenicians lived in maritime city states located in today’s Lebanon and their alphabet was soon adopted by their neighbours, among them, the Israelite Kingdoms..  This facilitated the writing down of great oral traditions and most importantly, the writing of the Bible in the 9th century BCE.

The Phoenicians were a great trading nation.  The map below from the History of English podcast show how the alphabet spread with Phoenician trade across the Mediterranean Sea. 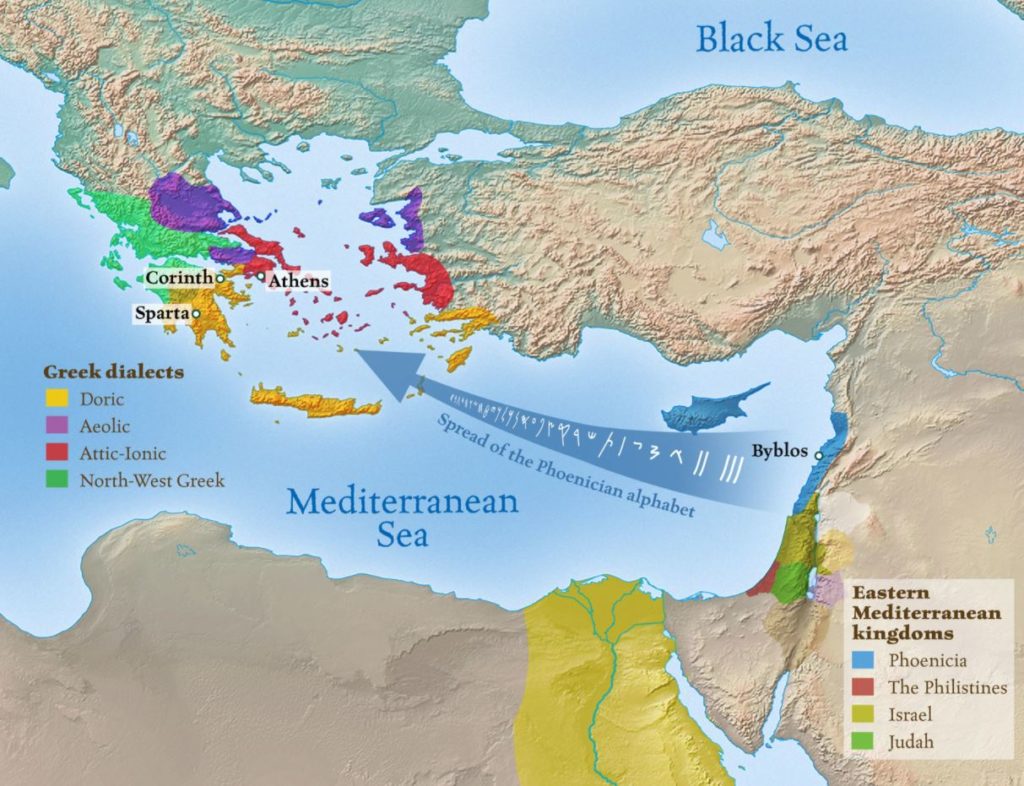 The spread of the Phoenician Alphabet throughout the Mediterranean Sea.  This map is from the History of English podcast was prepared by Louis Henwood.

In the 8th Century the Greeks adopted the alphabet too.  They needed to adjust the alphabet and add vowel sounds that were missing from the Phoenician alphabet.  Many more people became literate.  Now, they too could record their oral traditions, Homer’s Iliad and Odyssey.  The expansion of literacy created an explosion of creativity from the 6th century BCE.  The Greeks began to write down their ideas about law, sciences, philosophy, politics, literature, history and theatre.  We still study their texts to this day!  Some historians assert that the expansion of literacy enabled the first democratic societies.  Would the Greek myths, plays or histories have survived were it not for those 26 letters in our alphabet?

So, what did I take away from all this?

If you are interested in the history of the English Language listen to the podcast https://historyofenglishpodcast.com/

You can also read more about this in the wonderful Reading Ape Blog https://www.thereadingape.com/single-post/2018/01/07/phonics-the-lever-of-civilisation